Cadet recruitment in   Hong Kong
John B Wilson MNI, Vice Chairman, NI Hong Kong Branch
Captain Marso K P Law MNI, Chairman, Maritime Professional Promotion Federation, Hong Kong
Hong Kong was once a major source of qualified seafarers; however, the chances of meeting a seafarer from Hong Kong today in a port outside Hong Kong are greatly reduced from what they once were. The growth in recent years of the Hong Kong shipping register, which now ranks in the top 10 in the world by tonnage, has not resulted in a resurgence of local seafarers. The government's plan to develop Hong Kong into a logistics and transhipment centre in the Pearl River delta, and the fact that the Chief Executive of the government is himself from a family involved in shipping, have not resulted in Hong Kong's youth once again taking to a life at sea. The efforts of a determined group of professionals in Hong Kong sought to turn the tide and increase the number of Hong Kong youngsters going to sea. In 2002, with the number of Hong Kong registered seafarers, including officers and ratings, standing at about 150, the Maritime Professional Promotion Federation (MPPF) was formed. It's objective was to promote a seagoing career to youngsters in Hong Kong. The following organisations became members: Amalgamated Union of Seafarers, Hong Kong; Hong Kong Pilots Association Ltd; Hong Kong Seamen's Union; Merchant Navy (HKTC/HKP) Oldboys' Association; and Merchant Navy Officers' Guild &#0; Hong Kong. Individual members have come from: Hong Kong Polytechnic University; Marine Department of HKSAR; Seamen's Training Centre; and The Nautical Institute Hong Kong Branch.
Institute Hong Kong Branch committee members, Captain Marso K P Law and Captain Thomas M C Yeung, both senior Hong Kong pilots, have been involved with the MPPF since its formation. Along with Branch Honorary Treasurer, Petty Leung, who served as a radio officer with the China Navigation Company, they actively promote the work of the MPPF.
Those present at the initial gatherings agreed that the shortage of local maritime professionals in Hong Kong would have a knock-on effect on the expansion of future port developments, as well as the important shipowning, chartering and ship management sectors. The Hong Kong pilots also recognised that their ranks would need to be replenished, if they were to continue to offer quality pilotage services in one of the busiest port in the world.
A lack of support from the Hong Kong government in promoting a seafaring career during the 1990s had seen training institutes meet with great difficulties in recruiting and retaining sufficient students in order to continue to run courses. This
Left, Captain Marso Law MNI receives a cheque for HKS15,000 from Captain Alan Loynd FNI, then Chairman of the Hong Kong branch 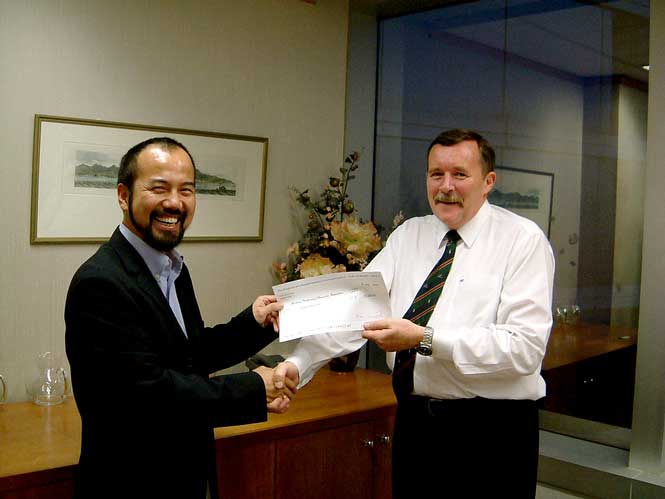 The main scope and nature of activities so far have included:
A website, <www.seagoinghk.org> which provides information to the public about seagoing careers.
Seminars organised for secondary school career teachers.
More than 20 career talks presented to school-leavers in secondary schools, Polytechnic university and Maritime Services Training Institute.
Seminars organised to train volunteers to make good presentations to secondary school. A team of about 15 volunteers is now ready to do this.
Pamphlets printed and despatched to different secondary schools.
Participation in a career exhibition.
Meetings with shipping companies to encourage them to offer working opportunities to allow young deck/engineer cadets to gain adequate sea time and experience.
The operational costs and scholarships have been sponsored by the MPPF member organisations mentioned earlier, with the MPPF also seeking contributions from the industry as well as from the government.
In early 2004, the Hong Kong branch of The Nautical Institute donated HK$ 15,000, (about US$1,930), to the MPPF; and the branch will continue to offer whatever practical and moral support it can.
Support to cadets
A scheme for MPPF scholarships was set up, amounting to approximately HK$72,000 (about US$9,300 per deck cadet) over a two year period, and HK$18,000 (about US$2,300) per engineer cadet for six months during their cadetship period. Scholarships were given to the cadets every time he or she returned from a ship with qualified sea-time, up until they have obtained the required seagoing experience. Apart from financial support, members of the MPPF also advise cadets about what they should know before joining their first ship, so as to best prepare them both practically and psychologically for what lies ahead. The cadets are invited to meet members of the Oldboys' alumni, so they can hear from their peers exactly what to expect, the basic idea being to make sure the cadets know they are not alone in their chosen career. Since the start of the MPPF programme, a total of 15 cadets (10 deck and five engineer) have been given the opportunity to work at sea in different shipping companies. Thanks must go to the following companies, whose lead will hopefully set an example for others to follow :
TCC Group Hong Kong. one deck cadet; Wah Kwong Ship Management: one deck and one engineer cadet; Parakou Shipping HK: one deck and one engineer cadet; Island Navigation Corp HK: one deck and one engineer cadet; Star Cruises (HK) Ltd: two deck cadets; Swire Pacific Ship Management Ltd HK: one deck and one engineer cadet; and Patt Manfield Shipping Company: one deck and one engineer cadet.
The three major problems that the MPPF has come across have been: shipping companies are now taking cadets from elsewhere, or not training cadets at all; the salary of cadets (around US$350 a month) is well below the acceptable level for young people from Hong Kong to work at sea and be away from home (and for this reason, the MPPF decided to provide the scholarships to those in need); and a general lack of awareness by the general public, and most importantly young people in Hong Kong, about the maritime industry and the possibilities a seafaring career can provide.
Positive responses
The principal of the Maritime Services Training Institute has stated that the pre-sea training course gained in popularity in the last year, and is now the third most popular course to be applied for by students who have graduated from secondary school. The efforts of the MPPF in going out to the schools has certainly played a part in this increased awareness. However, it was by no means easy  - it took nine months to find places with shipping companies for all 15 MPPF sponsored cadets.
According to the Hong Kong Maritime Industry Council website, the maritime industry contributes about 2.5 per cent of Hong Kong's GDP. No doubt with this in mind, and after lobbying from various quarters in the industry, including the MPPF, the Economic Development and Labour Bureau (EDLB) of the Hong Kong government, launched the Seagoing Training Incentive Scheme in July this year. The scheme is open to Hong Kong permanent residents who have graduated from a maritime training institute recognised by the Hong Kong Marine Department. Cadets presently serving at sea, or those who did not previously complete their cadetships, can also apply. The scheme has the support and guidance of the newly established Maritime Industry Council, which consists of 15 members, of whom 12 are directly involved in various sectors of the industry in Hong Kong.
This positive step by the government has been one of the goals of the MPPF. The government will now provide additional incentive funds to each cadet of HK$4,000 a month (about US$500) with payments made in arrears on completion of each employment contract, up to a maximum training period of 24 months for deck cadets and six months for engineer cadets.
Hopes for the future
In view of the government incentive scheme, the MPPF will now cease providing financial support to cadets and will now focus on promoting careers at sea. In the longterm, the vision is to have at least one cadet from Hong Kong on every Hong Kong registered ship. If Hong Kong people's perception of seafarers can change, so that they look at ship's officers as they do airline pilots, then young people would be more willing to join the industry  - a phenomenon not peculiar to Hong Kong. With the support of the Hong Kong government, it is hoped that more local people will now take to the sea, and in turn will be able to become shore-based professionals in the important maritime industry. Recruitment and people's perception of the maritime industry in Hong Kong and worldwide, and important issues facing those in the industry in general such as manning levels, seafarers welfare, security threats, and criminalisation, are all topics that are planned to be included in the next major Nautical Institute Hong Kong Branch seminar, which is scheduled to be held in 2005.
Seaways December 2004
×
Back to content