A group of members and friends gathered for the Hong Kong branch November presentation, to hear Alan Loynd FNI, Chairman of the International Tugmasters Association, pose the question: ‘Is damage caused by harbour tugs increasing, and what can be done about it?’

Captain Loynd began with a brief introduction of the complex propulsion and control systems fitted aboard modern tugs and made the point that, despite their complexity, there is no requirement for formal training or type-rating courses. Anyone with an appropriate certificate (often a local low-level qualification in the case of harbour tugs) can be thrown on board to drive these very sophisticated and expensive vessels. With the increasing power of tugs worldwide, and the fact their controls have many unique features, the potential for accidents is considerable.

The speaker spent some time highlighting the particular dangers when tugs are operating under the bow of a seagoing vessel travelling at speeds above 6 knots. Citing recent articles by Henk Hensen FNI, author of the NI’s Tug Use in Port, he traced a series of fatal accidents to tugs from the 1950s to the present day and explained the dangers, and the difficulty of avoiding them. He also pointed out that Capt. Hensen has rightly praised Hong Kong for adopting towing methods which prevent such accidents. In fact, Hong Kong’s tug companies have excellent tugmaster training programmes and local pilots are aware of how to use the tugs safely, so we have never recorded a fatal incident under the bows of a ship.

While many tug companies have lengthy and thorough training schemes, many do not. The standard tug contract used in most countries is based upon the UK Standard Conditions for Towage and Other Services which state that, whatever happens, it is generally not the fault of the towage contractor. So if damage occurs, the shipowner has no recourse. Many tug operators may rely on this to avoid any responsibility.

Captain Loynd admitted that he had no idea whether the number of accidents is increasing, or which ports are particularly bad, because it appears such data is not available. He suggested that ship owners and managers should pool their information and build up the necessary knowledge, because it is only when trouble spots are identified that it may be possible to do something about the problem.

Whilst there are no quick fixes, he suggested that owners and managers should lobby administrations to implement proper qualifications for tug personnel, and they should insist that these qualifications include a practical demonstration of ability.

Port administrations should be urged to adopt something like the UK Port Marine Safety Code, which requires that all persons involved in operations are properly trained and qualified, and that risks are assessed and dealt with. The Code has not been formally adopted, even in the United Kingdom, but its provisions are recognised as a blueprint for international best practice and, as such, might give owners a powerful bargaining tool even in ports with a poor safety record. Bad publicity can often be a powerful motivator.

Finally, Capt. Loynd suggested that tug companies with a poor safety record but a modicum of self-respect might be persuaded to improve training. There are now some very realistic tug simulators, and some truly excellent tugmaster training programmes featuring competence-based training which can turn out reasonable tug handlers in weeks rather than years. Sensible tug companies may see the benefits.

The presentation concluded with a short video about simulator training produced with the assistance of the International Tugmasters Association, and a lively question and answer session. 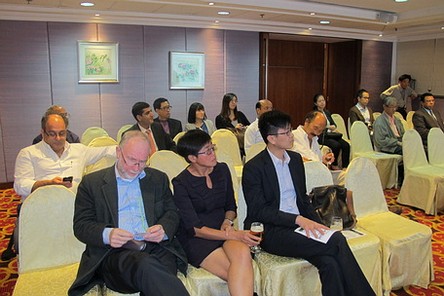 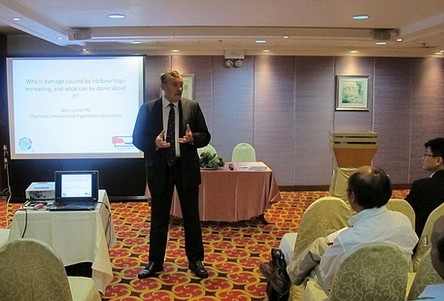