On the 21st of January 2003, a group of around 40 Hong Kong branch members and guests attended at the Royal Hong Kong Yacht Club, to hear Capt S.H. Pau FNI, a senior Hong Kong pilot and former chairman of the Hong Kong branch, give a presentation entitled "Pilotage in the world’s busiest container port".

Ably assisted by Captain Thomas M.C.Yeung, a fellow pilot and also a current Hong Kong branch committee member, who was at the controls of the laptop presentation, Captain Pau began by summarizing the requirements for safe piloting. He pointed out that as far as the pilot is concerned this begins, as it does in any port in the world, with the pilot having to travel to and board the vessel. He discussed how this operation can sometimes prove daunting, and how he and his colleagues still come across improperly rigged pilot ladders or access equipment in a poor state of repair. The principles of the pilot becoming part of the bridge team and the importance of his central role in communications were discussed, and prompted some questions from the attentive audience.

Captain Pau then himself posed several questions to the audience, using photographs of real traffic situations in Hong Kong waters, and asking ‘What would you do in this situation?’ The various scenarios that Captain Pau and his colleagues face each day include traffic situations involving high speed ferries, slower cross harbour ferries, tug and tows, dredgers, and numerous coastal vessels, not to mention the day to day ‘normal’ vessels such as container ships, passenger ships, tankers, and cargo and container vessels engaged in mid stream cargo operations, the last of which will only be found in Hong Kong. The special attention that is required when handling the deep draught bulk carriers that pass through Hong Kong and the Ma Wan channel enroute to neighbouring port in southern China, was discussed, including how best to utilize tugs and escort boats. On some larger vessels two pilots are engaged, with one acting as a co-pilot, who will handle communications and back up and monitor the actions of the other pilot and the bridge team. The location and characteristics of the port, and how they affect the work of a Hong Kong pilot were explained. As well as the influence of the typhoon season, these include the seemingly continuous dredging operations, with past and present reclamation projects for the new airport, Hong Kong Disneyland, and Container Terminal No. 9.

Day to day operations did not escape Captain Pau’s attention, as he explained that at present there are 5 pilot station positions in the waters around Hong Kong. Of the 50 pilots on duty each day, on average each pilot may be required to conduct 3 or 4 ship movements a day, though this can increase to 4 or 5 movements if a typhoon has affected the port.

The audience included several youngsters who have recently embarked on a career at sea, or are studying a maritime discipline. They were keen to know how one becomes a pilot. Captain Pau advised that the current entry requirement is for a Foreign Going Class 1 deck certificate of competency, and the ability to communicate in English and Cantonese. After 6 months intensive training and written and oral exams, the candidate will be classed as a junior pilot, holding a 2D license. After 4 years satisfactory service, progressing each year to piloting larger vessels, the pilot may then take the Class 1 exam to become a senior pilot. As well as practical on the job training under the guidance of senior training pilots, simulators are widely used in Hong Kong for pilot training. Pilots also attend at the Star Cruises simulator in Kuala Lumpur, and at Bridge Resource Management in Australia. When long or deep draught vessels are being piloted, an electronic Portable Pilot Unit (PPU) may be taken to the vessel. This instrument is linked to the GPS satellite system, and provides real time predictions of the vessel’s movements, and hence can act as an aid to the pilot. Information gained from PPU’s are also used in the training process.

The presentation was very informative, and gave a personal insight into the many factors that make pilotage in Hong Kong waters a challenging and rewarding career. When asked of the future, Captain Pau, forecast more ships needing pilots, and more challenges, which include continuing to find suitable competent seafarers to become Hong Kong pilots. After the customary post presentation dinner in honour of the speaker, a group of 10 members and guests were treated to a cruise around the harbour in a motor boat belonging to one of the pilots, Captain C.L. Yu. 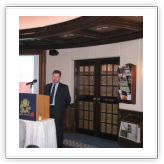 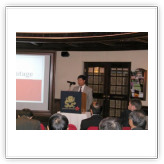 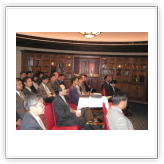 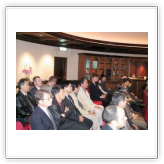 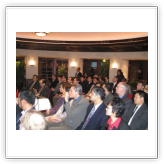 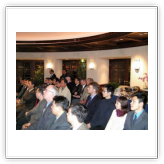