I said earlier that the one disadvantage of Hong Kong is the payroll burden and
whilst salary levels in Hong Kong are high by international standards and high
compared to most countries in the region the workforce are generally very
efﬁcient and diligent. It can be argued therefore that we do get value for money.
The high salaries for most local staff have not been driven by greed but by
necessity and in particular the high cost of accommodation of even the most
modest type. The dramatic fall in domestic housing costs both for sale and rent
combining with low interest rates has eased the pressure on salaries considerably.
To give you some idea of the scale of the reversal, when I arrived here some 7
years ago wage inﬂation was running at 12%; for the last 3 of those 7 years it
has been 0%.
Hong Kong’s tax system ranks as one of the most benign in the world and as
there is no Capital Gains tax the owner who is fortunate enough to make a proﬁt
on the sale of a ship (and sadly these are few and far between these days) can
retain it entirely.
That is surely a very compelling argument to be located in Hong Kong!
As I said earlier the present administration has not changed the taxation structure
signiﬁcantly and it is hoped that that will be the case in the future. The danger is
that as Hong Kong is now a service centre rather than a manufacturing centre
manufacturing having moved over the border into China over the last decade.
Should the present global economic downturn deepen then this could force the
government to look closely at the tax laws and seek new ways of raising revenue.
I think however that this scenario is unlikely in respect of personal taxation as to
raise taxes would leave less money for people to spend thus fuelling wage
inﬂation and potentially slowing down or delaying any recovery.
Political stability is something that Hong Kong has enjoyed for over 150 years
and has been an important contributing factor to its success. Fears that this
would change when the territory reverted to China have proven to be unfounded
and are likely to remain so for the foreseeable future. This cannot unfortunately
be said for some other countries in the region.
China’s entry to the W.T.O. will surely have a very positive impact upon the
fortunes of Hong Kong. Other speakers today will deal with the positive impact
on the port of Hong Kong but I also believe that more service oriented
businesses will establish themselves in Hong Kong as international trade with
China increases.
The world would be a very different place today if aeroplanes and telephones
had never been invented. Unfortimately they have and they have become an
essential part of business life. It is therefore very important to be based
somewhere where both air connections and electronic communications work
efﬁciently. Perhaps the only other city in the region to rival Hong Kong in this
regard is Singapore.
Hong Kong’s air connections to Europe, the USA and throughout the region are
second to none and the travelling time to the airport can be measured in minutes.
Unlike some other locations where a journey to and from the airport can be
measured in hours. If you do not believe me try getting to either Manila or
Bangkok airport late on a Friday afternoon!
Shipping is a 24 hours 7 hours a week intemational business and the ability to
communicate globally at any time of the day or night is no longer a luxLn'y -—it is
essential.
Hong Kong is on a par with almost any modem business city with all modern
communications being available. Not only are they available but most
importantly they are reliable with good back-up and service support and again
that cannot be said for some other locations in the region.
Finally and probably the most important factor is the availability of maritime
related services in Hong Kong, or to put it another way, its importance as a
maritime centre. There are few places in the region that can boast container-
handling facilities on a par with Hong Kong and its importance as a feeder port
carmot be denied. Whilst the ship repair facilities cannot accommodate very
large ships they are more than adequate for most of the vessels that call at Hong
Kong.
The territory has an abundant supply of maritime lawyers, marine insurance
brokers, ship and cargo brokers, average adjusters, surveyors and perhaps most
importantly banks who are willing to extend loans to ship owners. Those ship
owners amongst you may also wish to note that there are also some excellent
ship managers in Hong Kong.
The Lmique status which Hong Kong enjoys — that of being part of China whilst
at the same time having its own register — offers the Hong Kong based ship
owner a distinct advantage. The ﬂag is not considered by the ITF to be a ﬂag of
convenience and therefore Mainland Chinese seafarers can be employed on
Hong Kong ﬂag vessels. The savings in operating costs resulting from this
combination can be considerable and we have now operated up to 14 of our
Hong Kong ﬂag vessels with PRC crew for some time. The savings in crew
costs are signiﬁcant and the perceived shortcomings of PRC crew, mainly that
of language difﬁculties, are quickly becoming overcome.

Several initiatives have been implemented in order to promote the Hong Kong
register and the Marine Department itself conducted an extensive market
research survey to determine what is and what is not attractive about the register.
Obviously cost is an important factor when considering under which ﬂag to
register a vessel and that aspect of the Hong Kong register has received
particular attention.
There is also a concerted initiative to promote Hong Kong as a shipping centre,
not only to ship owners but also to all whom are involved in the industry. The
SAR and the HK register is now being promoted at conferences and exhibitions
world wide and this week is only one element in that promotion. This is
receiving the full support of, among others the Hong Kong Shipowners
Association.
Finally a word about the Association itself. It is not, as so many of these
associations are, just a talking shop. It performs the real function of
representing not only the ship owners in Hong Kong but the broad spectrum of
marine related companies and through its connection with other associations it
presents them on an international basis. It is a very valuable source of
information and perhaps one of the most useful functions it performs is to
provide a forum for its members to communicate and interact thus keeping Hong
Kong shipping business where it belongs — in Hong Kong.
And so ladies and gentlemen, to answer your question “What are the advantages
of being based in Hong Kong?” I have to answer that there are many advantages
and few disadvantages, not only as a ship manager but as any form of shipping
services company. The situation does not look likely to change for the worse in
the near future. So why not come on in, the water’s ﬁne! 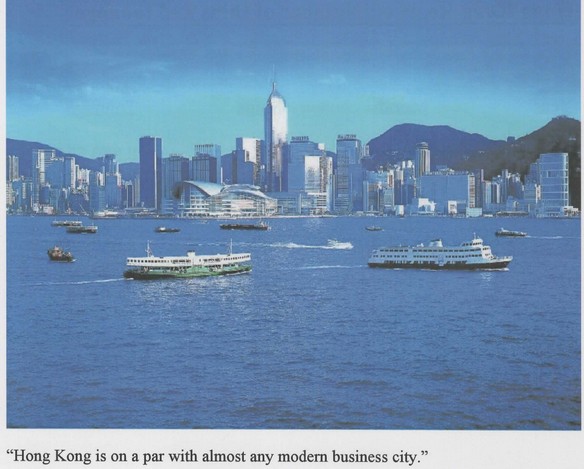