×
Go to content
Does Feng Shui Have a Role in Port Planning
Presentation by Roger Tupper
Assistant Director/Planning & Services
Marine Department, Hong Kong SAR Government
Ladies and Gentlemen,
It is both pleasure and pain to be asked to wrap up this Nautical Institute
Seminar on the Port of Hong Kong, Past, Present and Future.
Earlier today Phillip Bruce gave an excellent presentation on the Port of
Hong Kong in History. He omitted one salient point. When choosing where
to anchor his sailing clippers and locate his company premises did the head of
the ‘Princely Hong’ William Jardine consult a geomancer or did he just leave it
to his ship captains. Evidence is surely compelling that the old “Iron Headed
Rat”, as the local populace affectionately called Sir William, clearly balanced
the advice from his trusty captains with guidance from a geomancer.
How do I reach that conclusion and what is a geomancer. Well a
geomancer is not a well-travelled transvestite but a revered master of the alt of
Feng Shui or literally wind and water. Anned with a “lou pan” or Feng Shui
compass he applies this ancient art which in layman’s terms is the knowledge of
location. Where to place things to harness the natural environment to bring
you good foitune, a thriving business, much money and in the after life a
pleasant view.When Jardine ﬁrst clapped eyes on Hong Kong he observed one of the great
harbours of the world. In the parlance of Feng Shui it had excellent chi or
energy ﬂows. The hills of Kowloon and Hong Kong Island could provide
shelter from ﬁerce typhoon winds and the currents from the Pearl River had
scoured a deep-water haven for his ships to anchor. 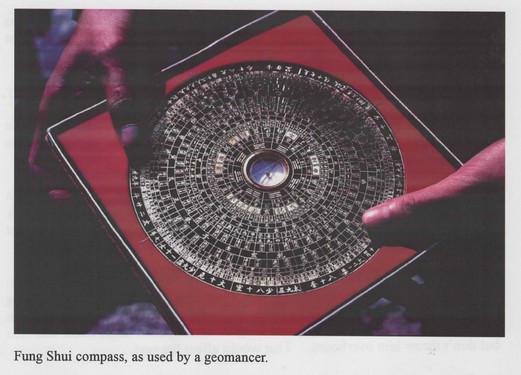 The same hills that provided the shelter for the harbour also inﬂuenced the
decisions as to where to locate the ofﬁces of companies on Hong Kong Island.
The ridgelines or dragon’s backs from Victoria Peak down to the harbour
determined the locations of the Hong Kong Bank and the residence of the then
Governor’s. Likewise our old friend Sir William set up his shop at East Point
at the base of ridgelines running from Jardines Lookout. The lowly
predecessor of the Director of Marine made do with a matshed at the foot of a
raging stream at what is now the corner of Wyndham Street and Queen’s Road.
Today the location is occupied by a wine merchant which I suppose is quite
appropriate.
Co-incidence? I think not. The early settlers in Hong Kong knowingly or
otherwise acknowledged the tenets of Feng Shui and prospered accordingly.
Evidence that Feng Shui was playing a role in those early days arises from the
ﬁrst proposal to erect a telegraph line between Hong Kong and Guangzhou.
This was opposed on the grounds that the capital of Guangdong is also known as
the City of Rams. The city was suitably guarded by the Tiger’s mouth and the
Nine Dragons of Kowloon. Nothing could be more unpropitious than to lead
the Ram by a string into such dangerous company and so communication
continued by pigeon for many years.
Despite such minor disputes over Feng Shui, the wealth of the world was
brought to this harbour to be traded and dispatched to the far corners of most
populous country on earth, China.
Hong Kong was established so people could and I quote from an early treaty,
“careen and reﬁt their ships, when required, and keep stores for that purpose”.
So companies soon developed offices, godowns and slipways along what is
today Queen’s Road. Ships then, as today, moored in the harbour to do
business and enjoy the hospitability of a free port.
The sheltered deep water on the west and south side of the Kowloon
Peninsula and at North Point were charted and the areas reserved for ship wharfs.
Feng Shui and recognition by Government of the importance of putting ﬁrst
priority on waterfront land for the port guaranteed their prime locations.
Some of the ﬁrst legislation enacted were port regulations to control ships.
For instance a Section 68(l)(c) of the Merchant Shipping Act prohibiting
masters of vessels from throwing not only dead animals but also dead seamen
into the harbour. Presumably murdering an incompetent ships cook was ﬁne
but don’t throw him overboard. That would affect the port.
Reclamation, surely never in hannony with Feng Shui was rarely
Lmdertaken in those early years and then only to create seawalls and land for
godowns and shipping ofﬁces. The port of Hong Kong, because that is what it
was pure and simple, developed in tune with Feng Shui.
Things were to change and the l950’s saw the arrival in Hong Kong of large
numbers of people from the Mainland. Not traders and seafarers but people
from inland who formed the base of a manufacturing industry that would see the
title “Made in Hong Kong” appear on the base of toys, watches and statues of
the Empire State Building and Nelsons Column. Hong Kong was changing
and the port and the reverence to F eng Shui would suffer a decline in importance
to the powers on high.
Whilst still an essential facility to provide the means of moving materials
into Hong Kong for manufacturing and exporting the finished products out the
needs of the harbour and shipping started to give way to the needs for space to
support a growing population both in terms of housing and workplaces. 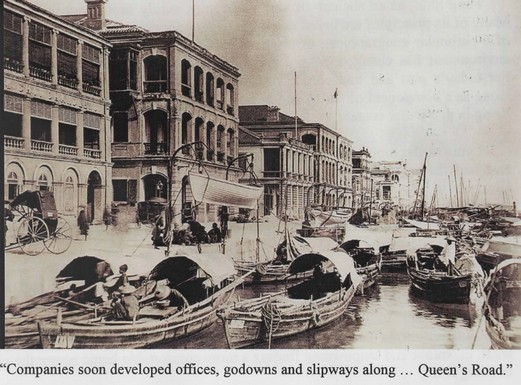 This meant reclamation and on a grand scale. Over the years the harbour
has changed dramatically. Due to successive waves of reclamation it has
become smaller or should we say more compact. What was used to ﬁll in the
harbour? In the early days it was those very hills that provided shelter from the
wind that were lopped off and spilled into the harbour. As the harbour was
ﬁlled in the shipping activities moved to the west. The cargo piers to Kwai
Chung, the dockyards and oil depots to Tsing Yi. The port was no longer
regarded as the leading light in our community. Sadly, with the seafaring
traditions that underpinned it, the port, along with Feng Shui has seemingly
ceased to be important to the public for far too long.
All these developments took place with scant regard to Feng Shui. Likely
as a warning, the harbour has developed a distinctly Lmcomfortable chop as
anyone crossing by Star Ferry will attest. Is this revenge by the Feng Shui
gods?
To return to my original question Does Feng Shui still have a role in port
planning, indeed, does the port and shipping still have a role in the future
development of Hang Kong?
Feng Shui, as an ancient art and philosophy, surely should not be ignored.
Many of its principles are based on common sense positioning to take advantage
of a particular geographical, or physical environment. Since 1 July 1997 our
environment has changed. As a part of China, it has become much bigger.
For today’s port and transport infrastructure planning we need to view Hong
Kong as a component of China and in doing so consider the F eng Shui of Hong
Kong in that wider context.
Lying at the mouth of the Pearl River with sheltering hills to the north and
east and the rapidly developing delta and hinterland beyond to Sichuan and
Guizhou to the west we have a very auspicious location indeed. Trade,
transport, tourism, technology ﬂows into and out of southern China along this
river basin. Hong Kong and its sister city Shenzhen are perfectly placed to
provide the intermodal link to ocean transport.
Should we begin to think in Feng Shui terms of a much larger port and
shipping community complex covering Hong Kong through Shenzhen to
Guangzhou and locate our various facilities to suit. Warehousing and
consolidation might better take place closer to manufacturing with ﬁnancing,
legal, insurance and shipowning ﬁnding a more comfortable home nearer the sea
in Hong Kong.
Yes, Feng Shui still has a role to play in port planning as indeed does the
port and shipping have a key role to play in the future success of Hong Kong
SAR. I believe the events of the recent Maritime Week and seminars like this
by the Nautical Institute will resurrect interest in this bedrock of Hong Kong’s
very existence.
Thank you.