×
Go to content
Hongkong Conservation Photography
Foundation
MARINE RUBBISH
REPORT
Edward Stokes
2001
TEL / FAX 2555 1327
CLEAR WATER 2001    Hong Kong ’s harbour, channels and coasts
are central to its history; to its sense of place;
to its international image; and to its tourist income.
Hong Kong has large, highly visible amounts of marine rubbish: ﬂoating in typhoon
shelters and boat anchorages; drifting in Victoria Harbour and inshore channels;
and washed up on otherwise beautiful coasts.
For commercial vessels, particularly fast ferries, marine rubbish causes trouble, cost, and
sometimes danger. Marine rubbish is also extremely unsightly. It affects the appearance of
typhoon shelters, the harbour, channels and coasts. It damages tourist impressions of HK,
leading to indirect economic losses.
Solving the “lap sap problem” at source requires years of commercial and public
education, especially with the ﬁshing ﬂeet. (Photo surveys of channel and coastal rubbish
show that much of it comes from local ﬁshing vessels.)
But, given the economic and aesthetic costs of marine rubbish, the SAR cannot afford to
wait for education to bring long-term results. And even with education, I-H('s dense
population means that the problem may always be with us.
Floating and shore marine rubbish, however, is much less of a problem than may appear at
ﬁrst sight. Photo surveys show that much of the rubbish is extremely weathered and old; it
is often concentrated in localized areas; and winds and the tides can be exploited in
effective clean-up strategies. The key to success is to trial, design, build and then operate
task-speciﬁc vessels. At present, all the govemment clean-up vessels are “compromises”,
inadequate to the task.
It is essential to develop effective clean-up vessels for HK, so our channels and coasts
can be kept as they should be — superb natural waterways, free of unsightly and
degrading rubbish.
This will be best achieved by business groups acting in partnership with government,
perhaps by business groups funding the development of effective vessels. Preferably,
these would then be operated by private enterprise, to ensure the most cost-effective
results.
Strongly promoted, eﬂectively cleaning HK's waters could give
major impetus to other territory-wide clean-up strategies —
ideally linked to the SAR entering the new millennium.
Edward Stokes
Hong Kong Conservation Photography Foundation
A NEW BEGINNING    ‘CLEAR WATER 2001'
The removal of marine rubbish is handled by the Marine Department. This
may seem to make sense, because its personnel are expert with vessels.
Most marine rubbish originates from, or nearby, the land -- as is evident in
HK and as has been proven elsewhere. Hence, marine rubbish is not so
much a ‘marine’ problem as a 'waste' problem; and its solution should be in
part the responsibility of waste disposal experts.
The Marine Department (MD) need not be held responsible for poor rubbish
collection, as its priority must be the safe operation of I—lK's extremely busy port.
Instead, marine nlbbish should be handled by the Environmental Protection
Department -- or it should be fully privatised tmder EPD's supervision.
The government’s tiny Waterwitches are outdated, and could be disposed of.
The MD’s six relatively new ‘Sea Cleaners‘, together worth about $60 million,
could be bought out -- and the MD ﬁnancially compensated. These vessels are
inadequate as channel cleaners.
The establishment of an 'environment‘ bureau is a timely opportunity to make
this change. By bringing the matter forward now, it can be incorporated from the
outset into plans / budget for the bureau, increasing operational effectiveness.
Given careful thought, integrated management, and resolve, HK's marine
rubbish situation could be reversed with more speed and impact than any
other local environmental problem.
The highly visible results of a new, successful marine rubbish programme,
premised on effective vessels, would bring major 'environment PR ' gains. This
would boost the image of the new bureau; and it would help raise wider
community awareness concerning the environment.
MARINE RUBBISH -- AGE & DISTRIBUTION
The large amount of marine rubbish seen in HK waters, especially in very
visible areas, suggests an overwhelming problem. This in part explains the
apparent defeatism and inaction concerning the issue.

AGE OF MARINE RUBBISH
Much of the marine rubbish, especially that seen around typhoon shelters, rocky
coasts and coves, is extremely old. This is evident from its extensive weathering,
old oil staining etc; and from the fact that many such places have never before
been systematically cleaned.
If ad hoc methods (sampans / ﬁshing boats) were employed to remove much of
this aggregation of old rubbish, the future task will be much smaller than now
appears. Thus, in the medium- and long-term, relatively few specialized vessels
will be needed to achieve dramatically improved waterway amenity.
DISTRIBUTION OF MARINE RUBBISH
The origins of marine rubbish are only generally known. One study has shown
that relatively little comes down stormwater drains (using grilles to catch this is
impractical, as the clogged plastics would cause back-ﬂooding). Much certainly
comes ﬁom the ﬁshing ﬂeet; some from other vessels; and other causes.
Nonetheless, general observation (especially after heavy rain) clearly indicates
that the vast majority is ‘land orginated'. That is, it comes from human activity
around the land, not from human activity in the channels.
Winds and tides strongly affect rubbish distribution. Rubbish often collects into    ‘rafts’, and concentrated rubbish slicks gradually cross channels until ﬁnally
washing ashore. Winds predominate in distributing surface debris. Tides
predominate with submerged and semi-submerged rubbish (such as plastic).
Thus, clean-up vessels can be used as 'rubbish barriers’. For example, were a
vessel to run (two or three times per week) through Aberdeen fairway, closely
follow the coast to Green Island, cross over to Lamma (intercepting wind driﬁ
rubbish), continue past Lamma, and return to Aberdeen -- the vast majority of
the rubbish that now fouls the NE Lamma coast would never reach there. 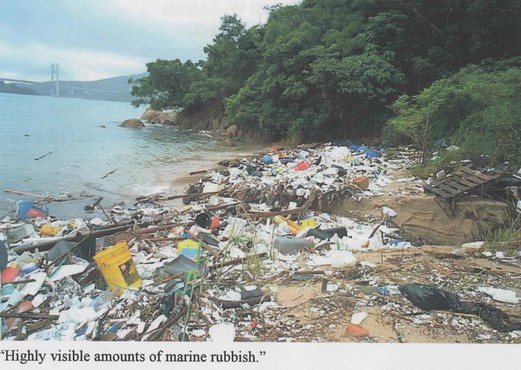 MARINE RUBBISH - THREE AREAS
Depending on its actual location, marine rubbish presents different clean-
up problems. Hence, to effectively clean HK's waters and coasts, vessels
must be task-speciﬁc. Rubbish is found in three distinct kinds of area, as
outlined below:
1. Typhoon Shelters and Boat Anchorages
The rubbish is often trapped between boats or by breakwaters.
Clean-up boats must be small and highly manoeuvrable, and able to
gather up‘ isolated patches of rubbish -- ‘anchorage scavengers’.
2. Victoria Harbour and Inshore Channels
Rubbish driﬂs with the winds & tides; much of it is half-submerged.
Clean-up boats can manoeuver easily, but they must cover large areas,
have wide 'sweeping' and large ‘bins’ -- ‘channel sweepers’.
3. Rocky Coasts and Coves    This rubbish is mostly polystyrene and plastic. Clean-up boats must
be shallow-draught, able to manouvere close inshore, and equipped
with overhanging working gear -- ‘coast pickers’.
Each of these three areas requires a task-speciﬁc kind of vessel.