×
Go to content
The Environment of Hong Kong’s Harbour
Past Present and Future
Presentation by Kim Salkeld
Nautical Institute HK Branch Seminar
3O November 2001
The conventional view of the environment is that it has been getting
steadily worse. Looking at Hong Kong’s Harbour, I’d like to suggest a more
dynamic picture of the environment. I will look at three aspects of the harbour :
the physical environment; natural ecology and then man made pollution, setting
out some of the historical changes and a few thoughts on where the inﬂuences at
work in each of these areas are likely to take us in years ahead.
The Physical Environment.
The illustration below shows what the harbour of Hong Kong looked like
about 9,000 years ago: 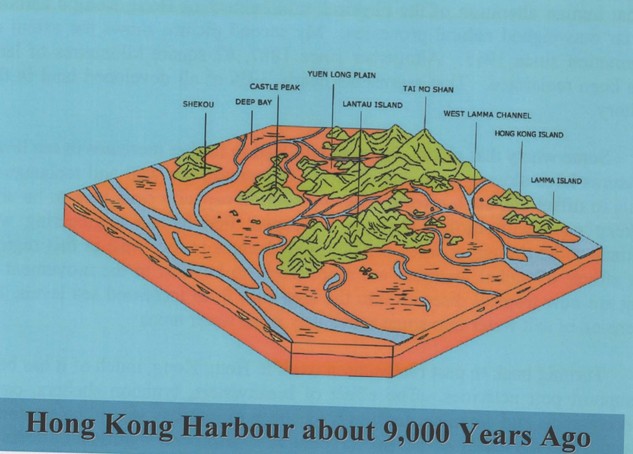 As you can see there was no harbour at all. The port of Hong Kong is the
consequence of major increases in the sea level after the end of the last ice age.
Natural processes of changing sea levels, changing land levels and
sedimentation all continue to have signiﬁcant effects on the harbour. For
example, rising land, coupled with siltation, is changing the very badly named
Deep Bay quite rapidly.
Old physical features still have very marked effects on the harbour, and
not just the mountainous islands that have been left by the rising sea to give
shelter to the harbour from wind and waves. The sand laid down over millennia
in the old riverbeds is the source of the sand used to form most of the
reclamation in Hong Kong. In tum, the pits left after the sand has been removed
have become the sites where mud is deposited after it has been removed from
other parts of the harbour during maintenance dredging or excavation before
new reclamation work. Carefully selected pits — those not exposed to strong
tidal scouring or wave action - are where mud contaminated by years of on shore
industrial activity and vessel maintenance can be deposited and then isolated by
layers of clean mud covering.
The reclamation and dredging activity is the sign of man at work, altering
the physical environment to suit human needs. Over the last 150 years, the scale
of that human alteration of the physical environment of Hong Kong’s harbour
has far outweighed natural processes. My second picture shows the extent of
reclamation since 1985. Altogether since 1887, 62 square kilometres of land
have been reclaimed. That represents nearly 30% of all developed land in the
tenitory.
Some worry that global warming will lead to further increases in sea level.
Measures have already been taken locally to increase sea wall and reclamation
levels to offset any such effects. The engineering capacity exits here to be able
to keep pace with further changes. I expect that human engineering will
continue to be the major force for physical changes to the coast in this region.
The effects of global warming are more likely to be seen in the movement of
what are now tropical diseases into the area and, from increased sea levels, the
extension of salt water into some previously fresh water areas.
Ttuning back to past reclamation work in Hong Kong, much of it has been
to support port activities. The effect of breakwaters, typhoon shelters, cargo
working areas and container terminals has been to increase vastly the economic
potential and the safety of the port. There have also been significant effects on
the natural environment, particularly coastal ecology, and on man made
pollution. 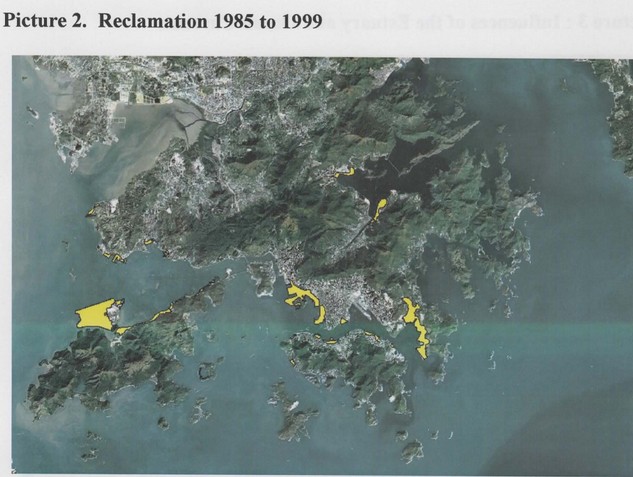 Natural Ecology
Terrestrial and marine ecology provides a backdrop for the activities of
the harbour. Having a sub-tropical climate, and with a marine environment
affected by both warm and cold currents and by transitions from relatively fresh
estuary waters to saline oceanic water, Hong Kong is an area of high potential
ecological diversity on both land and sea. Picture three illustrates the
combination of inﬂuences from the Pearl Estuary and ﬁom oceanic currents. 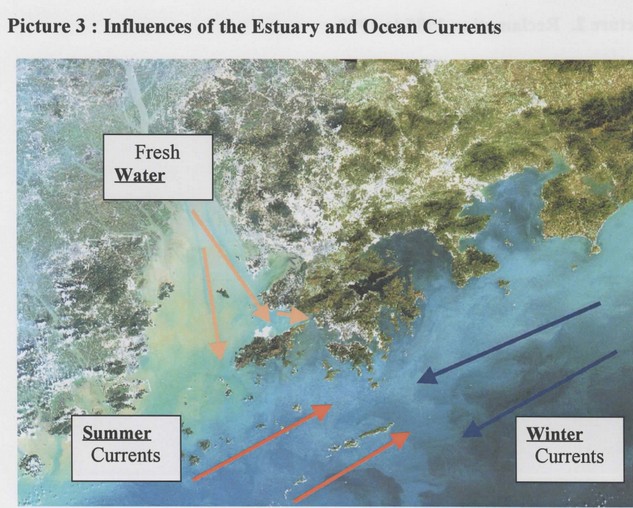 A couple of thousand years ago — when we begin to ﬁnd archaeological
evidence of merchant shipping activities at places like Pem1y’s Bay — mariners
passing through the harbour would have looked at mountains covered in dense
forest. There were some coastal settlements drawing some of their subsistence
from the sea. These settlements were also getting an important building material
from marine life. Many old limekilns have been found along the shore, in which
sea coral was processed to get material for cement. The forests provided the
fuel for this industry. The smoke from the kilns and other fu'es, together with
aerosols from the sea and the volatile organic compounds given off by the
forests would have given this place a certain amount of air pollution even in the
days before coal and oil added their effects to the air.
By a thousand years ago, mariners would have begun to fmd a
dramatically changed picture on the land around the harbour. The forests had
been cleared by poor farmers moving into the upland areas. They created
grazing land for cattle and kept it clear with ﬁre. Early photographs of the
harbour of Hong Kong show the barren aspect that this created, but the words of
Hong Kong’s ﬁrst Financial Secretary, Montgomery Martin in 1843, seem to me
more graphic: “Hong Kong cannot be said to possess any vegetation;  after the
heavy rains of May, June and July, the hills assume somewhat of a greenish hue,
like a decayed Stilton cheese; but the whitey-brown or red streaked ridges, with
the scattered masses of black rocks, give a most uninviting and desolate aspect
to the island, which is unrelieved by the aajacent mainland, whose physical
features are precisely similar to those of Hong Kong...”
The development of Hong Kong as one of the great international trading
ports from the mid 19"" Century has had several major effects on the terrestrial
and marine ecology.
Visually, the most dramatic has been the reforestation of much of Hong
Kong. The wealth generated by the port has been invested among other things in
programs that have extended the area under woodland cover from about 2% of
the land area in 1948 to nearly 25% today. This wasn’t all done for aesthetic
reasons. Indeed, most planting was associated with water conservation
measures. Ecologists have pointed out that much of the new planting was with
species that are not native to the area, diminishing the value of the woodland as
habitat. Work is now in hand to create nurseries for seedlings of native trees for
use in future.
The effects of port development on the marine environment have been
more extensive.
Reclamation for wharves, dockyards and more recently container
terminals and river trade terminals have replaced many miles of diverse
coastline with sheer walls. These give little support to marine life.This is
beginning to change as new designs of sea wall and reclamation provide more
space for marine organisms to re-colonize and replenish stocks.
Huge increases in demand for cement for construction in the 19“ and
early 20"‘ centuries led to huge increases in exploitation of coastal coral
resources. In 1906, Peng Chau island alone had over 60 boats mining the coral
reefs that used to exist between Peng Chau and Hei Ling Chau. 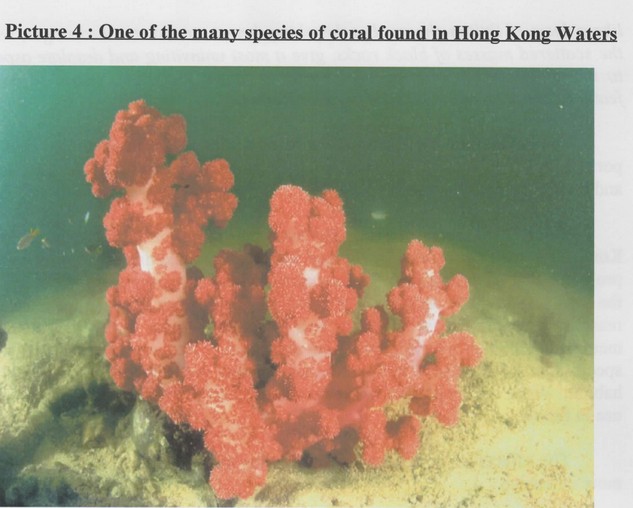 After the Second World War, cheaper cement became available from
other sources and the local coral communities started to see some recovery. But
then they, and the marine life they shelter, began to face a growing threat from a
ﬁshing community. This was expanding to meet the demands of a growing
population and was investing in motorized vessels and stronger nets, particularly
trawls. Trawls don’t just catch ﬁsh. They damage corals and seabed
communities on which ﬁsh depend for development. There has been a lot of
talk about the damage that dredging works have done to marine ecology over the
years. Certainly great care is needed in such works. But, research show benthic
communities that have re-established themselves rapidly after dredging or
dumping activities have taken place being bulldozed by trawl nets along with the
rest of the sea bed.
Of course careless ﬁshing is not the only threat to marine life. But,
comparing it with the effects of reclamation and of pollution — to which I turn
next — it is probably the most important factor in the declining wealth of the
local marine environment.