×
Go to content
“Navigational Safety On Mega Passenger Ships — Highest Priority”
By Gustaf Gronberg
Vice President Nautical Department
Star Cruises
06"‘ November 2001
The Growth Of The Leisure Industry
In the past twenty-ﬁve years, the cruise industry has posted an annual growth at
a rate of 10+ percent and the number of passengers have just sky rocketed. It is
estimated that 10 million or more will be carried this year. It is also estimated
that 50 new cruise ships are on order with another 30 on option. Cruise ships
carrying 3,000 — 4,000 passengers and crew is now commonplace.
Asia-Paciﬁc has seen a dramatic rise of its cruise industry over the last few years.
This growth is attributable to the introduction of exciting megaships and new
itineraries. The cruise industry is unique as this is one industry where capacity
spurs demand.
In Asia, Star Cruises, now “The First Global Cruise Line”, is poised to increase
its dominance in Asia-Paciﬁc after spending 8 years pioneering ﬁrst-time cruises,
establishing routes, proactively developing cruise infrastructures and facilities,
educating and marketing irmovative cruise products that appeal to all spectrum
of consumers. Star Cruises currently commands 70% of the market in Asia-
Paciﬁc with ships calling at over 35 destinations carrying over 5.5 million
passengers since its inception. The recent acquisition of Norwegian Cruise
Lines (NCL) by Star Cruises has created interest from seasoned world cruisers
who will now have the opportunity to cruise globally. Cruising on an Asian ship
also allows Americans and Europeans opportunities to discover Asians’ unique
culture, foods, people and arts while enjoying warm Asian hospitality.
As the market matures, various factors will attract more Asians to cruising.
New ships in the pipeline will offer more exciting products and unimaginable
luxury. Cruising is also hassle-free, comfortable and safe. Its value-for-money
concept and affordable luxury cliché of an all-inclusive vacation will appeal to
all age groups and backgrounds. Cruising is also seen as an exciting alternative
to a predictable land vacation. 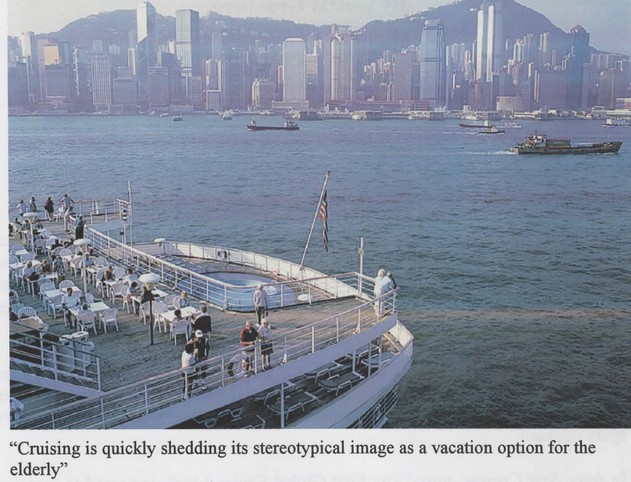 In Asia-Paciﬁc, cruising is quickly shedding its stereotypical image as a
vacation option for the elderly. Statistics point to a relatively younger median
age. The typical Asian cruiser is not retired, has a stable job and takes cruising
as a family vacation largely due to the fact that modern cruise ships in Asia-
Paciﬁc are purpose-built offering a fanfare of activities for both adults and
children and the option to do nothing at all.
Cruise ships in Asia-Paciﬁc attract a healthy mix of ﬁrst-time and experienced
cruises ﬁom Europe, United Kingdom, Australia, Asia, India and the United
States. This diversity ensures an international experience for vacationers.
Navigational Safety — Highest Priority
Safety for the passengers and crew on a cruise ship has always received the
highest priority as it carries the most valuable cargo of all, PEOPLE. Despite
the cruise industry’s exemplary safety records, it is subject to intensive media
scrutiny even of the most minor mishap. An accident on a cruise ship reﬂects
the image of the whole industry and several recent incidents involving highly
reputable cruise companies clearly indicate that there are issues that needs to be
addressed to tackle the causes of the incidents. Today, large cruise ships are
very modern with the latest technology on the bridge, state of the art ﬁre
detection and extinguishing systems, etc. A lot of efforts and money have been
spent to build the ships with technology driven solutions and maybe not enough
consideration are given to the human element, the people operating the
equipment.
Under the International Maritime Organization (IMO) International Safety
Management Code (ISM) Code ships are required to develop and implement
bridge procedures as part of the required overall Safety Management System
(SMS). The IMO Standards of Training Certiﬁcation and Watchkeeping
Convention (STCW'95) lays down guidelines for training, certiﬁcation, fatigue
and even permissible levels of alcohol for watchkeepers. The Intemational
Chamber of Shipping (ICS) ‘Bridge Procedures Guide’ provides the shipping
industry with guide lines for developing bridge procedures. The Code,
Convention and the Guide deal in a general way with bridge procedures; the
detail and speciﬁcs are left to the individual ship and /or the shipping company.
This implies some variation in interpretation and standards.
Star Cruises ships operates in some of the most congested waters of the world
such as Singapore, Malacca Straits, Hong Kong, Hainan and Taiwan Straits and
the Japanese Inland Sea. With the responsibility for protecting the lives of
passengers and crew in this environment, Star Cruises at the very outset
consciously made the decision to aim for the ‘highest possible standard‘ in
developing a safety management system including bridge procedures for
operating its vessels. As a model of ‘best practice‘ Star Cruises adopted the SMS
model developed and used by the corporate airline industry that has a similar
proﬁle with regard to responsibility for passengers and crew.
The SMS model used in the airline industry in general but particularly in the
corporate airlines sector is a more sophisticated approach to safety. There are
good reasons to respect the quality and integrity of a system that is used in an
environment where most failures (human or technical) are very likely to lead to
the demise of the operator and the total destmction of the craft. There is nothing
as focused as self- interest and more urgent than self-preservation. The
corporate airline model incorporates both human factors and technologically
driven approaches to safety. 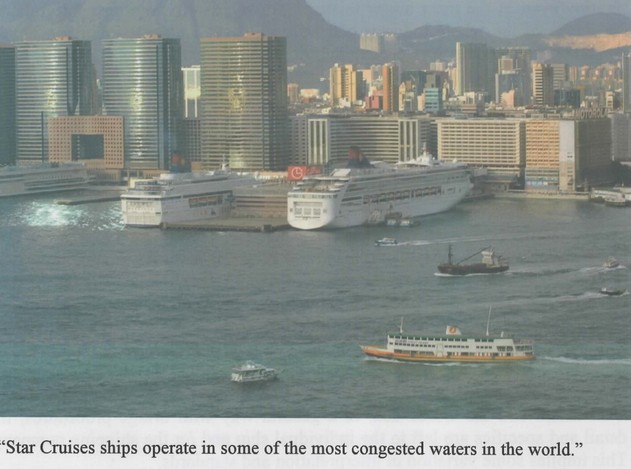 Summary
A serious accident in one cruise ship can colour public perceptions and have a
harmful effect on the whole industry. It is in the common interest of the whole
industry to have a good safety record. With responsibility for the lives of
thousands of persons and huge ﬁnancial implications it is critically important for
the cruise industry to develop and implement the highest standards. This is
similar to the situation in the airline industry.
The cruise industry cannot depend on IMO to develop these standards. The ISM
Code and STCW'95 alone are not sufﬁcient to cover the stringent operational
requirements of cruise vessels. The cruise industry must develop these standards
by using the airline industry model combined with details and speciﬁcs derived
from operational experience.
With this paper, I have in short described the pro-active approach that Star
Cruises have taken to Navigational Safety which we feel is the most important
safety issue to be addressed when cruising in the South East Asian congested
waters.
The huge investment by Star Cruises on the state-of the-art facility Simulator
Center, commitment to install VDRs, rigorous selection methods of Ofﬁcers,
two Ofﬁcers on watch and zero alcohol policy Lmderscores our believe that the
cruise industry should attain as high a safety proﬁle as that of the aviation
industry.
Nautical Institute HKG Branch Seminar 2001 “the port of Hong Kong Past,
Present & Future” — 30.11.01 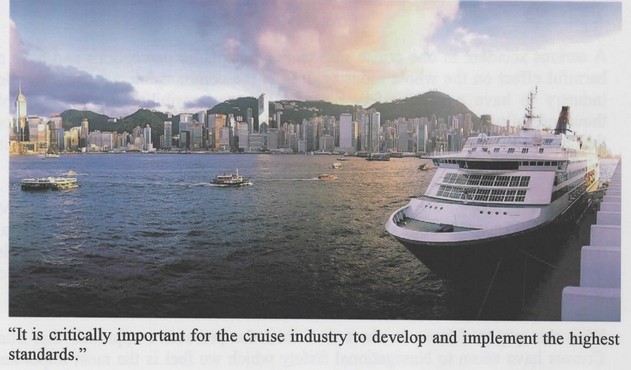